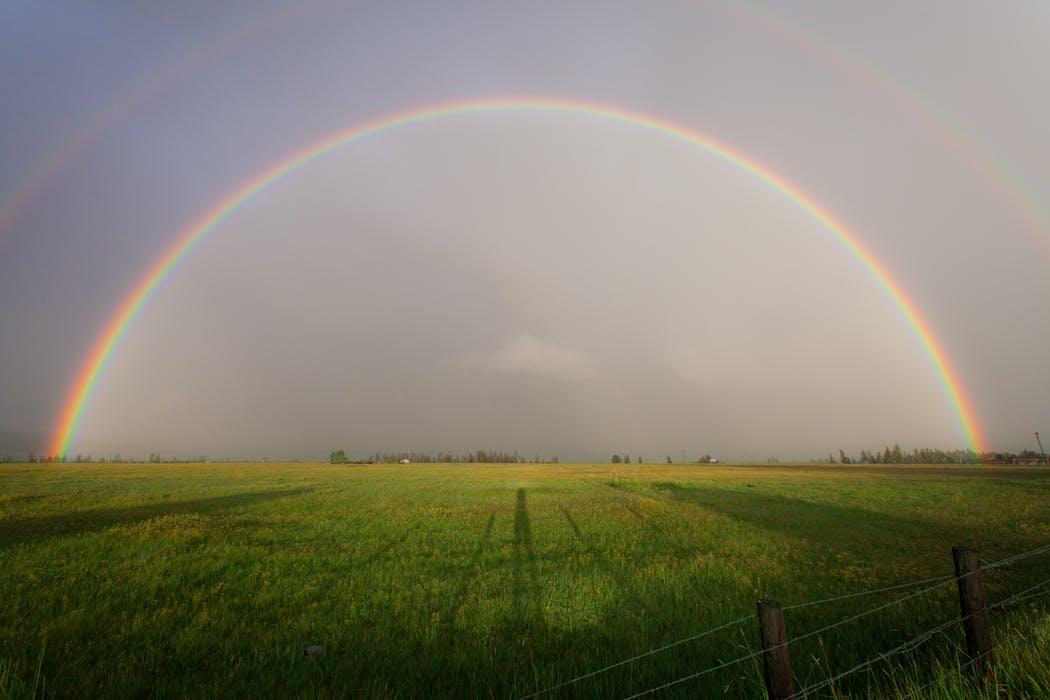 On my way home today from the 2017 Dressage Nationals I beheld a rainbow. At first, I didn’t know it was a rainbow. My first impression was a shaft of rather red light in front of me. It was very diffuse and as I drove I kept trying to figure it out.  It was puzzling, it appeared to solidify and then the light around it shifted and my friend Rebekah in the passenger seat remarked upon the beautiful rainbow. It was a doozy for sure.  I think it was the first rainbow I’d ever seen where the colors were so distinct.  Rebekah and I continued to watch it and she remarked: “I guess you really can’t ever reach the end of a rainbow.”  We must have watched that rainbow for 15 minutes and about 15 miles.  It was truly remarkable.

Which leads to me to this past week at Nationals.  This was my fifth trip to Kentucky. We have been attending since 2013.  This year was a bit of a repeat for me. I did a do over by repeating 4th level. But, this year was the first year since 2013 that I qualified for both the last test of the level and my freestyle.  So, I had 2 reasons to attend.

Going to Lexington for this show is not a task to be taken lightly. It consumes a great deal of time, energy and money. Not just for me but for everyone around me.  Since I qualified this year for both 4th level and the 4th level freestyle the trip was on.

Winterfair handled the trip like the pro she is. She was the only horse going from our barn this year and when she got to the Horse Park she was not near any other horses but took it in stride. The weather was bitterly cold, but it didn’tseem to faze her and with our indoor stalls the rest of us were happy as well.

Wednesday was a light work day and Winterfair seemed to be in a great place. Our warm up ride on Thursday while acceptable did not go as planned.  There was a lack of energy and we were not as in sync as we had been at Regionals.  Friday, I discovered that while I had made my seat better Winterfair decided that it wasn’t where she wanted it and I had a different horse. Saddly that horse stayed with me for the next few days. Warm ups were sparring matches and somehow, we came out the other end with fabulous work but that work did not come easily or when I wanted and needed it.

What is one to do when you have traveled over a thousand miles only to find out you can’t ride? Well after a disastrous ride on Friday I opted out of the show each day.  I got Winterfair dressed; I got dressed; we went into the warm-up to see if today was the day. I am an optimist but, also a realist.  The optimistic side of me always said: ‘you’ve got this, you can do it’, the realist said: ‘you’ve changed too much, she doesn’t understand’. So, I scratched both of my championship rides.

Of course, it was a disappointment. I came to Kentucky to compete.  I came, chasing a rainbow filled with dreams. But, my show week went something like the rainbow I saw today but in reverse.  The trip started with an idea so distinct. I could feel the rightness of coming. It was so clear to me in all its splendor.  I saw myself in the victory gallop.  Maybe not first, but certainly present with my polo wraps and the ribbon on Winterfair’s neck. What I ended up with though was a hazy indistinct impression of a rainbow: it’s essence but not the fully formed arc.  The possibilities through the fog.

The realist in me will settle for the lessons learned this past week.  I have an exceptional horse who gives me so much every day.  I’m surrounded by wonderful people who support me when I win or lose.  But, I will continue chasing those rainbows as an optimist and one day we will make that victory gallop again.

This entry was posted in Shows. Bookmark the permalink.