While we had the first good weather in a week, I spent those days soaking up great information instead of sun.  I would have enjoyed being outside and riding a few horses, but I do think my time was well spent in the company of about 100 like-minded individuals.  The setting was Southwestern University in Georgetown, Texas.  The speaker was the FEI Dressage Judge General Stephen Clarke. 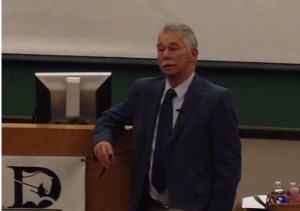 The symposium hosted by Austin Dressage Unlimited was titled: “Improving your judging eye and showing skill”.  Mr. Clarke spent two days keeping us entertained while educating us in the nuances of the judge’s job.

So without further ado here are the points I took away from his talk:

While much of what Mr. Clarke discussed had to do with judging a test in the end it has much to do with us as riders.  We need to know what judges are looking for and how they are trained to judge so we know the best ways to present our horses during a test.  Judges are really there to say what happens in that 5 minutes in the arena on any given day.  Just as judges need to know that riders don’t come into the ring to ride a bad test, judges don’t want to give low scores.

Many thanks to Austin Dressage Unlimited for hosting a great clinic; I hope to be able to attend next year!

*Each movement is scored on a scale of 0 (not preformed) to 10 (excellent). Some of the test movements and all of the Collective Marks have coefficients associated with them which mean they are worth two or more times the points assigned, the reason for this varies. Total points for the test are added up and noted as a percent to the total possible number of points for that test.  A percentage of 65% or higher is generally thought to meant the horse is ready to move up a level.

UPDATE: Here is Part II where we learn how to achieve a 10 on your movements.