Another fun and successful show at Hearthstone Riding Stables

Hearthstone Riding Stables hosted a pre Halloween show and costume contest on October 25th.  Right Start Dressage had seven riders entered in 17 classes this made for a busy day.   Everyone was a winner today even if the ribbons were not all blue.

Mishaal Hassan and her horse Bianca moved up to Training level today and put in very consistent workmanlike tests. Not bad for a pair that were not cantering a few months ago.

Ben Reynolds at age 81 took to the dressage ring for his very first show and made it all look easy. He and Save Me were quite the pair.

Sofia Khoury and Traveler the youngest members of RSD won all 3 of their classes and won the HDS Jr Into High Point Award. 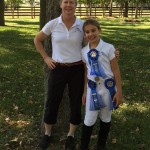 Mindy Fulroth and Kathy Rockwell’s horse Quinn were great in the Training Level Rider’s test. This was Quinn’s very first show at the ripe old age of 22.

Allison Pergande and Socs won their dressage equitation class. Their scores for Training Level were quite nice as well.

Claire Gorsuch and Griffin did a terrific job at Training Level. I was most proud of them for cantering throughout both tests. They had been having a bit of trouble with that for the past week.

Last but not least; Vicky Guedez and Aragon won both of their Training Level classes as well as the HDS Jr Training and above High Point Award. 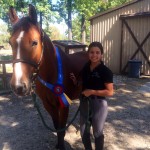 Everyone is looking forward to the Houston Dressage Society Schooling Show Championships in December.

Many thanks to everyone at Hearthstone Riding Stables for putting on great show and to Richard Howard for being such a good judge.

This entry was posted in Awards and Accomplishments. Bookmark the permalink.