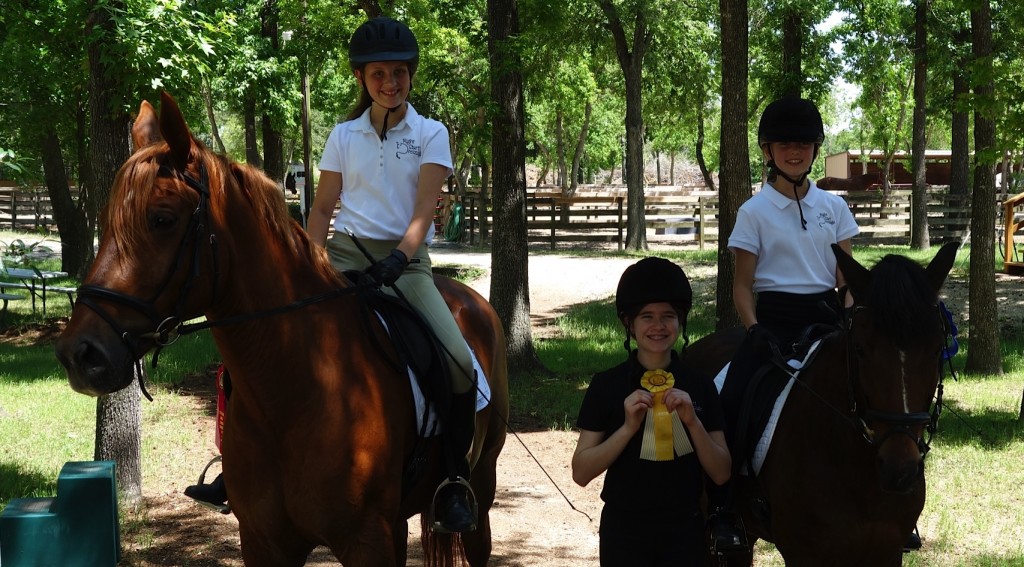 Michelle Johnson started out the day riding the Training Level Rider’s Test.  She had her best stretchy trot circle ever and showed Excalibur to a score of 70%.  This was her first time showing the test and kudos to her for memorizing it and not needing a caller.

Our next rider for the day was Allison Pergande who had her personal best score at 1st level on 5 Oakes Socrates.  Their canter work was amazing.  Allison rocked both her halts and received 8’s.  Those came in handy when she also had some moments where things did not go so well.  The judge had an opportunity to use the whole range of scores with this pair.  Allison also won the Dressage Equitation Class. 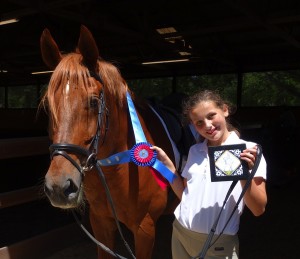 Claire and Griffin with their prizes

Then came Claire Gorsuch on Griffin.  Claire has said goodbye to Intro Level and hello to Training.  Claire was a winner in a big way.  She won the HDS Jr High Point Award at Training Level and above as well as overall High Point.

Jillian Donley on Skippy had a great show.  Their scores were respectable and their turnout was spot on.  They got some great feedback from their equitation class, and I know Jillian will be putting the information that she received to good use.

After lunch came the Intro riders.

This was Sofia Khoury’s first show on Traveler and her first one with me.  She ended the day by winning the HDS High Point Junior Rider Medal at Intro Level. 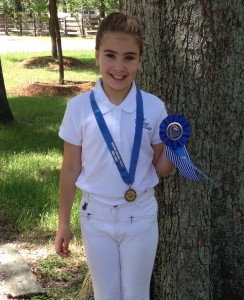 Sofia with her prizes

Our last rider and the last rider of the show was Elizabeth Hanner and Go Go Dancer.  She received her personal best score of 70% as well today at Intro Test B.  She went on to rock her canter work and ended the day winning both her classes as well as the HDS Adult Amateur High Point Award at Intro Level.

All in all, it was a great day with lots of good feedback from our judge, Leslie Cummings.  Many thanks to Mishaal Hassan and Susanna Jerez for spending their Saturday with us; they were a big help.  Thanks as well to Hearthstone Riding Stables and everyone there who helped to put on the show.  It was well run as always.